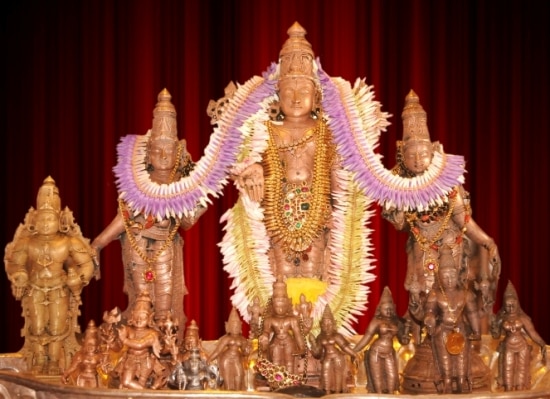 Ancient era was the witness when religious practices and spiritual principles flourished and temples became the world’s storehouse of Knowledge & Culture. Temples being the primary place of worship, are the sacred mansions of ultimate Grace and Happiness.

Sri Venkataramana Temple, Carstreet, Mangalore is one such temple where devotees from all corners galore in large numbers to obtain the grace of Lord Veera Venkatesha Swamy. Ever since its establishment, it is one of the prominent temples belonging to the Gowd Saraswat Brahmin (G.S.B) community.

The annual Car Festival is celebrated from Magha Shudda Tadige to Ashtami, is the main event which attracts thousands of devotees from all around. The temple follows Madhwa Vaishnava tradition professed by Sri Madhwacharya (Srimad Ananda Tirtha) wherein Lord Vishnu is regarded as supreme Brahman and Lord of the Universe. Lord Venkataramana one of the incarnations of Lord Vishnu is being worshipped as the presiding deity in the temple.

The earliest history of the temple can be traced back to the mid-17th century when the idol of Sri Moola Venkataramana Devaru was installed in the shrine. Sources also throw light that, the bronze idols of Sri Veera Vittala and Sri Gopalakrishna was consecrated in the temple by one Sri Sowkar Mhal Pai in the year 1736 A.D. During this period the temple consisted of only the Garba Griha (Sanctum Sanctorum). But the significant landmark in the history of the temple dates back to 1804 A.D., when the main idol of Lord Veera Venkatesha Swamy (Patta Devaru) was consecrated. This indeed, was the event the devotees of temple all along the generations would relish in their hearts forever! There are two similar stories pertaining to the obtaining of the main idol.

According to one source, a Bairagi (an ascetic/recluse) visited Mangalore in the year 1804. He sought refuge in a temporary shelter in carstreet and worshipped the charming image of Lord Veera Venkatesha. Fascinated by the beauty of the Idol, crowds started gathering in big numbers to witness the daily puja of the idol and in order to avoid the flow of the crowd, he moved to lower carstreet. But the people of the locality most of whom being the members of G.S.B community were staunch on procuring the idol for their temple, approached the prominent and respected family of Sowkar Thimmappa Pai and succeeded in their request in procuring the idol.

The second story, the widely accepted one, follows that a Bairagi (an ascetic/recluse) visiting Mangalore in 1804 A.D, had with him the idol of Lord Veera Venkatesha, covered with a cloth in a sack. He kept the sack as a collateral for a certain sum of money, in Sowkar Thimmappa Pai’s shop with a stipulation that in case the Bairagi failed in returning the amount lent, Sowkar was free to use the contents of the sack according to his free will. Unaware of the contents of the sack, he kept the same in the storey of his shop. One day it happened that, fumes started emanating from the storey. The watchman under the mistaken impression that the shop had caught fire, rushed to Sowkar’s house and intimated him about the incident. The Sowkar and his men wasted no time in reaching the shop. There they were astonished to see that there was no fire nor any loss incurred, but only fumes were effusing from the sack. As he opened the sack he was enthralled to behold the splendid and magnificent idol of Lord Veera Venkatesha Swamy. He carried the idol and kept it in his family temple (Opp: Sri Gokarna Math, Carstreet) and requested his fellow men to search for the Bairagi. The search however went in vain.

It was unanimously agreed by Sowkar’s family and nobles of the community that the idol would be displayed to H.H. Shrimad Vibhudhendra Thirtha Swamiji of Sri Kashi Math Samsthan who were camping at Manjeshwar. Swamiji being an ardent saint were very much pleased at sight of the idol. They affirmed that the idol is a miraculous one and suggested that the idol should be consecrated and worshipped in the community temple, where Sri Veera Vittala was the presiding deity, in the better interests of G.S.B people. Their request was wholeheartedly accepted and subsequently on Jyeshta Shuddha Trayodashi of Rakatakshi Samvatsara the idol of Lord Veera Venkatesha Swamy was consecrated under the directions and guidance of Swamiji. Four learned Purohits conducted the proceedings for a period of three days.

The Silver Lalkhi was first taken for procession in 1888. The Idols of Sri Lakshmi Devi & Sri Ganapathi Devaru was installed in the year 1896 and 1898 respectively. The construction of Sanna Ratha commenced in1909. The Silver Clad Dhwajasthambha was erected in the year 1966. The Diamond Crown was offered to The Lord in the year 1977. It was in the year 1999 the devotees were blessed to witness Sri Veera Venkatesh adorned in Golden Palanquin.

In 2011, the Jeernodhara process was initiated, and on 6 May 2011 the Nidhi Kalasha Staphana and foundation stone were laid by the Ubhaya Guruvaryas of Sri Kashi Math Samsthan. On 16 January 2012, the Punar Prathistha(Re-installation) of the deities was established in the holy presence of the Ubhaya Guruvaryas. HH Sudhindra Tirtha Swami and their Patta Sishya Srimad Samyamindra Tirtha also blessed the Pente with an opportunity to organize Parihara and Punar Prathistha event of Lord Vyasa Raghupati followed by chaturmas vritha of H H Srimad Sudhindra Tirtha Swami.

The panchaloha Idol of Lord is characteristic of Vijayanagara Architecture. Including the peetha its height is about 2 feet. The idol has a Katari (sword) appended to its right waist. Hence the name ‘Veera’has been prefixed to the title of the Lord.

Legend also has it that, The Emperors of Vijayanagara Kingdom offered their prayers to this idol before engaging themselves in any battle. In common with all Vaishnava deities this idol bears a Mukuta Kireeta (crown) above the forehead, there happens to be the Basinga worn by Bridegroom during marriage.

This signifies that Lord is on the march towards his wedlock with Sri Padmavathi Devi and Katari on his waist is for warding off the evil & demonic elements obstructing his way.Both the ears of the Lord have Makara Kundala and a flower like jewel above the ear, which substantiates that the idol belongs to Vijayanagara era. It also has a small necklace & garland with a pendent on the neck.

The idol also has a Skanda Maala on its shoulders. The idol is adorned with Chakra in the upper right hand and Shanka in the upper left hand. The lower right hand has Varada Mudra pointing downwards towards the feet and lower left hand is held just below the waist. This signifies that the devotees in service of The Lord would not get flooded by the dreaded ocean of samsara.

The idol has a strap (girdle), lion faced girdle’s hook, on thighs gold clad jewels and similar bracelets below the knees. From waist till foot it is covered with Uttariya and it folds hanging from side of both the legs. Fingers of hands, legs and thumb fingers is decorated with rings. Thus the idol illumines with all above mentioned features.

Hence, Lord Veera Venkatesha has been nourishing all the devotees by his effulgent grace as hitherto. He also is regarded as the goal by the spiritual aspirants seeking Mukti (redemption). For the people desiring material ends, he is the benefactor of all their wishes and aspirations. It is verily said that persons praying with unwearied mind are absolved of all their sorrows and peace of mind, knowledge, health, and prosperity have flown into their lives.

Having obtained the grace of Lord Veera Venkatesha Swamy the devotees do not reckon any other gain as greater than that!! 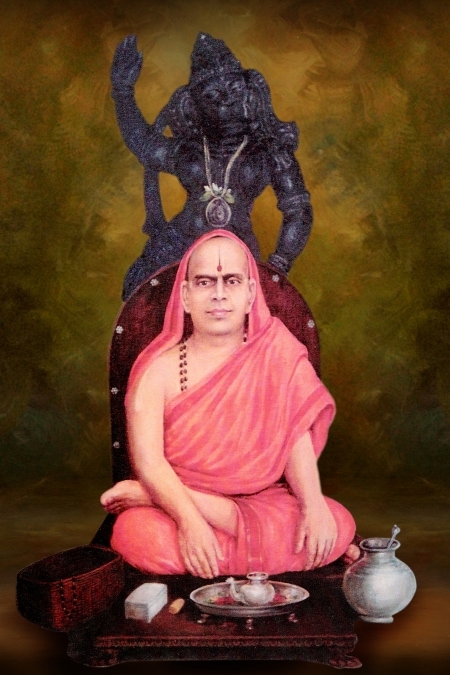 His Holiness Shrimad Vibhudendra Thirtha Swamiji was the fourteenth swamiji of Sri Kashi Math Samsthan, born on Thursday, 21st march1782 i.e. Chaitra Shuddha Saptami, Shubakrithu Samvatsara. H.H. were a proficient scholar in Sanskrit language and have written many commentaries on Dualism (Dwaita). Swamiji were initiated into sanyasa by their Guru H.H. Shrimad Surendra Thirtha Swamiji, the then Matadhipathi of Sri Kashi Math Samsthan.

In 1804, Shrimad Anantheshwara Temple, Manjeshwar was renovated by the locals and during the same occasion H.H. Swamiji consecrated the idol of Shri Bhadra Narasimha, in the temple. Swamiji had the practice of keeping the crown (Kireetha) of Lord Vedavyasa of Sri Kashi Math on Sri Bhadra Narasimha during daily pujas. Once it happened that he was unable to remove the crown after puja.

Swamiji interpreted this to be the Lord’s wish to keep it permanently and thereby donated the same to the temple. H.H. also donated a gold coin to the temple. The rules and regulations of religious paraphernalia prescribed by Swamiji are followed even today in the temple.

The most distinguished contribution of Swamiji is the installation of LORD SRI VEERA VENKATESHA SWAMY in1804, on Jyesta Shuddha Trayodashi of Raktakshi Samvatsara, in the premises of Veera Vittala Mandir,Mangalore with Lord Veera Vittala as the supreme deity.

Later on the temple became renowned as Sri Venkatramana Temple. Swamiji were just twenty two years of age during this event.

In 1834, when the Swamiji were camping in Manjeshwar, it felt to them that their end was nearing and sent for their Shishya immediately. But due to the non-availability of proper transport facilities, the Shishya Swamiji were unable to attend their Guru. In order that the daily pujas are performed continuously without any lapse, H.H. Shrimad Vibhudendra Thirtha Swamiji decided to initiate one Abbayya, a Vaidhika, amongst the retinue of Swamiji into sanyasa, and named him as H.H. Shrimad Vasudendra Thirtha Swamiji and subsequently attained Samadhi on Magha Bahula Panchami of Vijaya Samvatsara (Thursday 27th February, 1834) and their Samadhi is in the Sri Kashi Math premises of Shrimad Anantheshwara Temple, Manjeshwar.

Following are all the details about the different Sevas offered to Lord Sri Veera Venkatesha and Parivara deities.
Click Here